The lads were on the table this weekend.  The 410th, commanded by Ross, successfully defeated a German counterattack.  The German I. Battalion, 252 GR was supported by Panzergrenadiers, Panzerjaeger IVs and StuGs from their own division and 116. Panzer; the 410. by SU-100s and SU-76 from a supporting mechanized corps.


The scenario was Reinforcement in Defense: Off Table from Grant's "Scenarios for Wargames."  The Scenario features a starting force in a decent defensive position, with follow-on elements appearing at random times by random roads.  The scenarios is designed for Horse and Musket and so calls for infantry and cavalry both light and heavy.  We took a unit as 3 stands of infantry or infantry support or two vehicles.

The rules were Blitzkrieg Commander II; this was a big game for those rules with over 3500 points of Germans and a potential 2600 points of Soviets.  Potential because each reinforcing units stood a 1:3 chance of taking the wrong turn and never showing up at all. 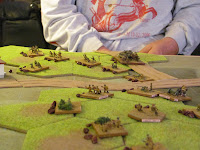 The Reds deployed dug in on the ridge 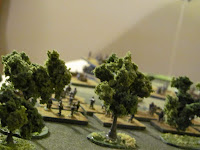 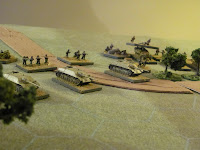 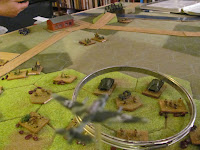 with the main armor through the central gap, and the panzergrenadiers in their SPWs ready both to exploit and threaten the soviet right.

as the Stuka slipped past the Soviet fighters and swept in with every  promise of smashing both SUs, suddently it all came apart.  Soviet AA fire drove off the Stuka while the battalion commander on the left bungled or had no action for three consecutive turns. 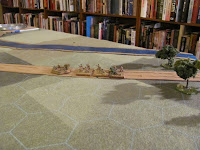 As Soviet infantry began the march to the front, desperation set in.  Ross graciously suggested that, in the absence of a blunder, a commander is always allowed one action for one formation. 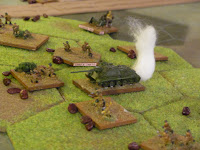 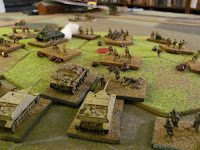 At the midpoint of the game, finally moving from the wood and with everything concentrated on the Soviet left, the German attack started to move.  The Nashorn delivered our first AFV kill.

But the grenadiers reached the ridge only to face the "Hurrahs" of the SMG-armed  Soviet re-enforcements and the concentrated fire of the 410th's mortars.

As German infantry began to fall, a Sturmovic arrived to add well-timed insult to injury. 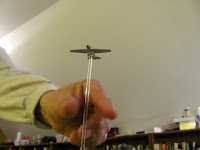 And swept off, ignorant of the confusion left on the ground. 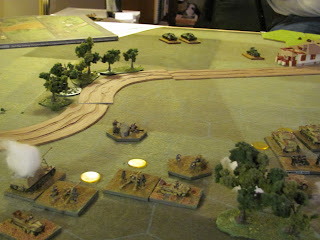 The last straw was the arrival of two more SU100s on the German left, distracting the assault guns from their support mission while the German infantry perished under Soviet mortars and machine guns.

The shattered remnants of the grenadier regiment - less than half the force that had crossed the start line -- spoke of a decisive Soviet victory.
Posted by Lentulus at 5:46 PM

My root blog - find my others from here